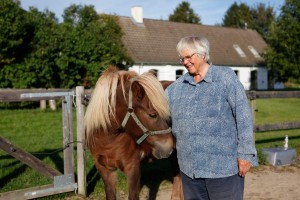 Hildur Jackson was born in Denmark in 1942 and has spent most of her life in the suburbs of Copenhagen. She obtained a Bachelor of Law degree from the University of Copenhagen and  did postgraduate studies there in cultural sociology. She married Ross Jackson in 1967, had 3 sons and 6 grandchildren. She passed away in 2015 after five years of fighting breast cancer.

Hildur was a long time grass roots activist, (natural birth, women’s movement, peace movement, environmental movement, ecovillage movement). Her passion to solve the 1970s women’s dilemma between full time work and being isolated and dependent as housewives, inspired her to co-found one of the first Danish co-housings in 1972. She and Ross lived there with 6 families for 20 years and saw 12 children grow up in these warm and inspiring surroundings with a common house, Icelandic horses, chickens, a football field and vegetable gardens.

In the 1980s she coordinated for seven years the Nordic Alternative Campaign, a movement of 100 peace, environmental and women groups who aligned themselves with the scientific community to build a vision of how to solve the global, the social and the environmental problems and find ways of realizing this vision. She also initiated and coordinated a Nordic contest of ideas. With representatives from the Nordic countries she participated in the Women’s meeting in Nairobi.

In 1988, Hildur became a qualified permaculture designer, when Max Lindegger taught his first course in Denmark at the Folkecenter for Renewable Energy and she arranged two Danish permaculture courses in Vrads and in Thy.

For 6 years she followed the spiritual training of Danish teacher Jes Bertelsen, and began to meditate. From 1992 on she was been a member of Sahaj Marg, meaning “the natural path,” a raja yoga meditation system now practiced in 70 countries. She became a “preceptor”, receiving people for “sittings” in her home.

In 1987, she and Ross initiated Gaia Trust with the purpose of supporting the transition to a more sustainable future. Together with Ross and Bernard Lietaer, she formulated the Gaia Trust strategy – with primary emphasis on yin (how we want to live with each other and the natural world) with support from yang (technology and economy).

For 10 years Hildur studied and collected material on Giordano Bruno with the intention of writing a book or film manuscript on him and his life. It was never completed.

In 1991 she moved to Thy with Ross and their youngest son, Frej, to create a spiritual ecovillage to include a training facility, an organic farm and the Gaia Trust office, which later became the international office for the Global Ecovillage Network (GEN). The first task was to refurbish 1000 m2 and turn the 70 acres of “Fjordvang” into an organic farm. For three years she and Ross did so while negotiating with the county to get permission to build an ecovillage. When finally they got the permission the Minister of Environment vetoed the project “in the national interest” and they decided to move back to Copenhagen.

From 1993 on she was been active in supporting the Danish Ecovillage Network (LØS) as well as GEN.

Ecovillage Living: Restoring the Earth and Her People, co-editor with Karen Svensson, (Green Books, UK, 2001).
Ecovillage living gives an overview of what ecovillages are about, hundreds of photos and lots of practical knowhow and contact information—some say the best book on the subject.

The Earth is our Habitat, editor, (Gaia Trust, 1996) for the UN Habitat II conference.

Video: The Earth is Our Home: A Film about Rashmi Mayur, a man of the new global renaissance, (Gaia Trust, 1998).

At the gaia.org resources pages you will find additional articles by Hildur