from the Foreword by David C. Korten, author of “When Corporations Rule the World” 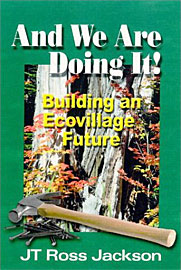 This book presents the personal life journey and vision of a very special human being, Ross Jackson, and his life partner Hildur Jackson. The story gains a special power and interest from the fact that Ross leads an unusual double life. In the world of global finance he is known as the board chair of Gaiacorp, a leading manager of currency based hedge funds and advisor to international financial institutions on foreign exchange management. In the world of environmental activism, he is known as the board chair of Gaia Trust, a visionary grant making foundation that has expended more than $15 million in Gaiacorp profits to support groups around the world pioneering the development of ecovillages and green enterprises as the foundation of a 21st century civilization.

Ross is one of a special circle of visionaries that includes such luminaries as Anita Roddick of the Body Shop, Dee Hock of Visa International, Paul Hawken of Smith and Hawken, and George Soros of the Quantum Fund. These are no ordinary social critics. Each rose from a modest background to achieve extraordinary success in the institutions of international business and finance. Each then moved on to share with the rest of us their insider’s understanding of the destructive nature of the institutions they came to master and lent their energies to the task of creating societies more responsive to the needs of people, community, and nature.

While it is not uncommon for successful entrepreneurs who create large personal fortunes to eventually turn their attention to philanthropy, Ross is distinctive in that he established Gaiacorp for the primary explicit purpose of generating profits to finance progressive social change.

Ross provides a powerful insiders view of the real nature of the global economy and how it is being intentionally crafted by global corporations and financiers through institutions like the World Trade Organization to speed the wanton exploitation of labor and destruction of the planetary life support system for quick profits. He brands economic globalization a program of “shareholder protectionism”, because the rules created and enforced by the WTO seek to maximize shareholder profits while passing the real costs of production onto the larger society. He calls neoliberal economics “free ride” economics, because it seeks a free ride for those who own productive assets—in direct violation of one of the most basic principles of market economics.

Ross informs us that protectionism, so long as it is protecting the interests of people and nature, is not really a bad thing. The real issue is whether global rules will protect the interests of an elite group of corporate shareholders or the interests of the other 99 percent of humanity. Ross cuts through the self-serving mantra of the free trade advocates to affirm some obvious truths that have been badly obscured by free trade ideologues.

The true heart of this book, however, is its exposition of the possibilities within our reach to organize human spaces into ecovillages that restore our sense of community and our connection to the earth while providing us with environmentally sound and sustainable sources of livelihood. Ross brings an uncommon sense of reality to his vision of the possible. While it contrasts sharply with the rootless, money-mad world of the global economy, it is grounded in the real experience of hundreds of ecovillage and green enterprise experiments that are being developed around the world, many of them with financial and technical support from Gaia Trust.

A spiritual experience in India, eloquently described in Chapter 4, has given Ross an optimistic view of the human future. Many readers will find the final chapter— where Ross lays out his vision of an ecovillage future in a story format— to be their favorite. Ross believes, however, that widespread change is most likely to come only after a devastating breakdown forces an end to business as usual.

Excerpts from “And we Are doing it”